Bruce Lawson is not a techie - he does not teach people how to make the best use of CSS, nor does he post daily thoughts on his personal web log about the latest ingenious accessibility technique. So, why did we deem Bruce worthy of closer scrutiny (even if he did stipulate up front that he won't entertain questions about him and Britney)? Read on and find out why self-confessed non-techie Bruce has been winning friends and influencing people.

Tell us about your background, what jobs you've had before getting involved with the web development circuit.

Well, it's been a varied career, really.I graduated with a first in English literature, worked as an actor and theatre director, then became a programmer with AT&T before becoming a singer, guitarist and Tarot card reader in Istanbul, a volunteer pharmacist in Calcutta and a movie extra in Bombay, a kindergarten teacher and tutor to the Crown Princess' daughter in Thailand, and - mistakenly - arrested for espionage in Moscow.

All excellent training for setting up a Web developer's publishing imprint. 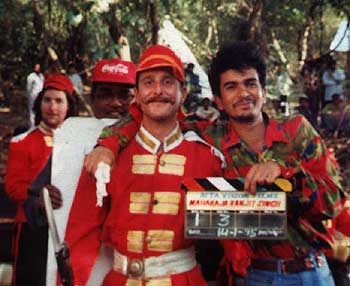 Web standards and accessibility evangelist Bruce Lawson on the set
of "The Maharajah Ranjit Singh" (NB: the moustache is fake)

How did you stumble in to the web development arena?

After 8 years of travelling I decided to return to the UK, and applied for a job as an editor at Wrox press - primarily because I could code and had a good command of English. They hired me and within a year I was told to set up a brand for Web developers, invent the name, the brand mission etc etc. I immersed myself in mailing lists for 3 months, floundered like mad (CSS? Weamdreaver [sic]? XHTML? Accessibility?) and eventually decided that web standards and accessibility were a good, innovative hook to hang a new brand on. People were passionate about CSS, accessibility etc which they weren't about DHTML, PHP - and I wanted to appeal to that passion. It was a commercial decision, but based on my own interests and beliefs. Life's too short to waste your time doing stuff that you don't believe in.

But, you're not a web developer, right? You 'talk the talk, but don't walk the walk' - discuss

Guilty as charged, your honour. But because I wasn't involved in the day-to-day writing of code, I had the luxury of time to build up a bigger picture - and a team of very patient techies to help me do it.

It's like when I was a theatre director - I didn't know how to blend the lights, operate the sound desk, I didn't learn all the words for all the roles - but I was the one with an overview and a veto on it all. Because I didn't go up a ladder and set the gels didn't mean I han't directed the lighting.

You're not a doer, then, but you have indirectly been influential in promoting web standards and getting respect for this. Must be satisfying?

Very satisfying - and entirely accidental. I thought Accessibility and Web Standards were already 'accepted', and we would just commission and publish the first book on the subject. As it was, I had mis-read the community - our books actually helped galvanise the community.

I emphasise "our" books - the authors, my colleagues at glasshaus like Ela Baylis, Matt Machell, Bill Johncocks, Pippa Wonson, Simon Mackie, Chris Hindley and Liz Toy were all there to carry the vision through when book stores laughed at the idea of launching a brand with a book on Web Accessibility. "What's the second book", they asked, "Web Sites for the Dead?"

Do you always prefix any conversation about standards/accessibility/markup etc with the phrase "I'm not a techie but ..."

Not now, no; I've osmotically become a bit of a techie. But, there's no need for me to be a techie as that only gives me the language to talk to the people who are generally pretty sympathetic to the idea anyway. (Any serious web developer has to have considered using standard mark-up and accessibility techniques, even if they don't need them for the current project).

But I also do consultancy - talking to the owners of businesses who are often very sceptical of standards and accessibility - or if not sceptical, are baffled by the acronyms spouted by their development staff. It would be counter-productive for me to talk tech with them; they want to know legal, moral, business, marketing and ROI, not a history of SGML.

Tell us a bit about DMXzone

Well, DMXzone has been going for while; a guy in Holland, George Petrov was one of the first UltraDev power-users and built the Zone to distribute Dreamweaver extensions and so on. It became a de-facto community, and when glasshaus was pulled under by the bankruptcy of our parent company, he wanted to help the authors find a new outlet for their talents, and be able to pay them, so he hired me to develop an article-a-day on 'responsible' web development. We don't charge a lot - it's $1.99 per article; Jeffrey Zeldman calls it the iTunes method of content distribution but it means we can pay the authors.

Well, we're trying to get a rich and varied collection of content; Tom Dell'Aringa of MACCAWS is writing on real-world JavaScript, Allan Kent and Gareth Downes-Powell on PHP/MySQL issues, Chris Ullman on ASP and ASP.NET, Robin Dewson on SQL Server and database issues, Molly Holzschlag of the Web Standards Project is writing on XHTML and standards - and Rachel Andrew is showing people how to take apart an existing tabular site and replace it with CSS. Then she'll be writing an accessibility series.

The web has a wealth of free information already - how does that tally up with the pay-per-download idea?

It's a time-saving feature; you can search around the web for a free article, that's unsupported and maybe quite old, or find some manufacturer's hardly impartial tutorials; maybe you find some IE-only script on a free web site and spend an hour tweaking it to work. That's fine, if you value your own time at less than $2 per hour - but personally I'd rather support a colleague and contribute towards their pay-packet, knowing that they've written many respected books or sites about the subject, and will answer questions on the DMXzone forums if I get stuck.

What does the site offer in terms of accessibility resources?

Not much yet; we've only been publishing for four days - but Rachel, Molly and Tom's articles on JavaScript, CSS and mark-up will obviously ensure that accessibility issues are dealt with in the course of teaching the subject.

Is the site itself as accessible as you'd like it to be?

Did you realise before Glasshaus went under how respected the series was?

I didn't know how respected we were - and I was humbled. When I found myself unemployed, minus the last month's pay packet and pension contribution, it was really the only comfort!

Would you ever get involved with traditional (print) publishing again?

Maybe. You don't do a degree in English lit without being a bibliophile, but it's a bad time to be in print publishing now; to make ends meet you have to charge more than many developers can afford. I don't think DMXzone will be printing books in the near future.

The Glasshaus book 'Accessible Web Sites' is on many people's desks - when the idea was proposed, did people think you're mad?

Even I thought I was mad when I first dreamed it up, but when Ela (the commissioning editor) started researching it, we found that many people were involved in the world of Web Accessibility - some were even writing books at the same time that we were. There was (and still is) a great hunger for usable information that doesn't try to score points or drag politics into the arena. [Read the review on Accessify here]

Most of the Glasshaus books were heavily collaborative affairs (often 4+ authors). Must have been fun at times?

Depends how you define fun...!

From a non-techie's point of view, who or what interests you most in the web standards/development world?

The future of Flash interests me a lot; whether Macomedia's Rich Internet Applications model takes off. It'll be a much better web experience for people like my father who's even less techie than I am, but I worry that the browser might be killed off. I suspect they will co-exist; Flash will be used for consumer sites, and HTML will return to the text-based, hyperlinked content that it was designed for.

An unsung hero is Bob Regan of Macromedia who works tirelessly to make Macromedia products accessible. He works for a vendor, sure - he's gotta eat - but he genuinely cares about accessibility. He helped me a lot with glasshaus books, and he's a lovely guy. He bought me a bottle of 12 year old American bourbon once, so I really mean that!

Finally, what's the best rumour you've heard about yourself?

That I've split with Britney and am now seeing Halle Berry.